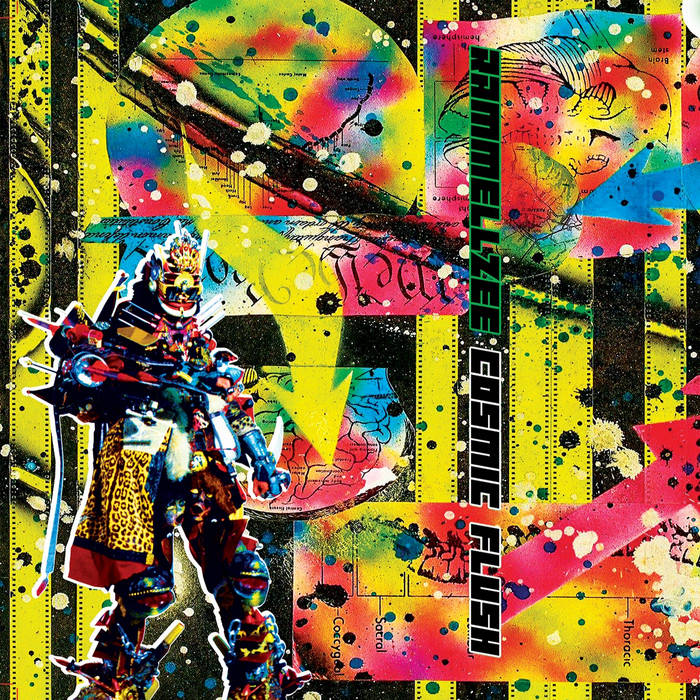 spooky_coochie this album rules, i'm so glad i found it. i love the way the vocals are put together in this glitchy, distorted way. so glad this got released <3 Favorite track: Paint To Pave The Road.

Recorded primarily in 2006-2007, completed in 2009, re-mixed and re-mastered in 2019. Ltd. edition cassette available at hecticrecs.bandcamp.com/album/rammellzee-cosmic-flush

Nearly a decade since his passing, the works of infamous graffiti artist, sculptor, rapper, and self-described “gothic futurist” Rammellzee continue to push the boundaries of visual art, music and metaphysical thought. Recorded mostly in 2006 and 2007 with producer/composer Jonah “Th' Mole” Mociun, the album Cosmic Flush is finally being released in full for the first time, courtesy of Holland-based label Hecticrecs, on cassette and digital at Hecticrecs.com and elsewhere.

Instrumental in the ’70s and ’80s NYC graffiti scenes, Rammellzee's work was backed by a philosophy based in math, linguistics and quantum mechanics. Amongst other theories, he put forth the idea that the stylized letters spray-painted on subway cars amounted to a weaponized language, propelled through time and space by the motion of the trains. Likewise, even after death, his multifaceted output barrels onwards, furthering its arcane purpose. From recent gallery exhibitions and video documentaries to various other homages, Rammellzee lives on, shaping future generations, even going so far as to inspire the UK-based Cult Of Rammellzee, a vastly-numbered performance group dedicated to spreading awareness of his art and conceptualizations.

The latest manifestation of Rammellzee lies in his final and arguably best-realized album, Cosmic Flush, a high-impact, hyper-speed juggernaut of abstract rap poetics and futuristic beats. “He told me he wanted to make death metal hip hop,” says the album's producer and music composer Jonah Mociun, AKA Th' Mole (among many other aliases). “And he kept saying to double the speed of his vocals and my beats.” While Rammellzee's musical legacy has been centered around the 1983 single “Beat Bop” produced by famed artist Jean-Michel Basquiat, the old school hip hop sound was never his preferred genre, with his subsequent musical endeavors being more experimental and abrasive in nature. According to Mociun, even the various far out works produced by the Death Comet Crew (including the acclaimed Bi-Conicals Of The Rammellzee album) were not exactly to Rammellzee's taste, but ostensibly Cosmic Flush comes closest to hitting the mark.

“He sent me his vocals on these mini cassettes from a hand-help tape recorder.” says Mociun. “He'd approve my beats first but then he said he'd just be listening to death metal while recording himself ‘in the toilet.’” Though the two never met face to face, with Mociun living in New Orleans and Northern California, they spoke frequently on the phone. “He'd explain the lyrics to me, and some of his mythologies. He talked a lot about linguistics, the cosmic flush concept, Alpha's Bet, and all this stuff that was mostly over my head to be honest. I feel like I'm still gradually figuring out what he meant by some of that stuff.”

Rammellzee died in 2010, shortly after the album's completion, halting any plans for a release. Now, about a decade later, after some partial leaks and unmastered 12-inch singles, the album is finally here in full form. And so, despite biological complications, the legacy and vision of one of history’s most revolutionary artists and thinkers blasts further into the future.

Bandcamp Daily  your guide to the world of Bandcamp